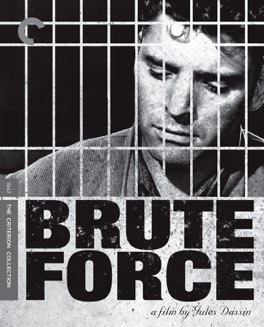 I really enjoy the Jules Dassin films I’ve seen, and this is no exception. As brutal as the title suggests, but also a very entertaining journey.

What is the point of our criminal justice system? What is its purpose? What is the point of all these prisons and of mass incarceration? Are they there to rehabilitate people? Is the goal to punish but also to ultimately redeem? Or are they just a place to send the undesirable among us, to get them out of our way? This presents all these perspectives and more.

The film follows the story of Joe Collins. We never learn exactly what he’s incarcerated for, what his actual crime was. It doesn’t matter, he’s in the system. What we do learn is that he needs to get out of prison, and for a reasonably noble purpose.

As the story starts he’s just returned from a stint in solitary confinement, after being set-up by the vicious chief of security of the prison, Capt. Munsey. We follow along as his circumstances get more and more desperate, leading to a daring and risky escape attempt. Along the way we also learn that the town who oversee the prison are tired of all the noise and commotion and just want to be able to ignore it all. They don’t care about redemption or rehabilitation, just the profits and to be left alone.

I’m going to spoil the ending, because I want to discuss it. If you haven’t seen the movie and you care about such things, go watch it. It’s a really entertaining, if completely brutal, look at the prison system of this period. Anyway, you’ve been warned.

The escape goes very poorly. The sadistic Capt. Munsey, who is destabilizing things inside the prison so he can replace the bumbling but well intentioned warden, has discovered the plot. He knows exactly what time, and roughly how, the thing is to be carried out. As a result, even though there’s a full scale riot, it all falls apart. By the end, Collins and Munsey are both dead.

The essay that comes with the film argues that the only reason Munsey dies is because this is a Hollywood film. That his death has to happen for the audience to see the death of anti-hero Collins as acceptable. I don’t think that’s what Jules Dassin was trying to say at all. There’s a speech at the very end by the doctor, who all along has been the voice of rehabilitation. He basically says that no matter what side you’re on, no one escapes the prison.

Systems produce what they are designed to produce. Our prisons are designed to contain, to punish, to exploit, and to forget. They are awful places that do very little to try and rehabilitate anyone. Recidivism is high, and the Munsey’s of the world are ultimately just as damned and trapped as the Collins’ are. If we want society to be avenged, if that’s the point, then I guess we must be doing great. But if the point is justice, then things have to change. - Jun 9th, 2020