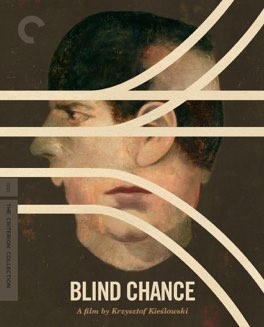 Another Kieślowski film, another incredible experience. This one is a bit rougher around the edges. There are moments that feel like he doesn’t quite trust his audience enough. But even in a slightly less refined state, it’s still better than most films you’ll see.

Kieślowski gives away what he’s trying to do right in the title. This is a complex film, that’s mining the same sort of territory he’ll return to in The Double Life of Veronique and the Three Colors Trilogy. This earlier film isn’t quite on the level of those later masterpieces, but that’s not really a fair comparison. It’s still absolutely stunning, and in certain ways it’s maybe even a bit subtler.

The story starts out somewhat disjointed, and at first I wasn’t really sure what this was. We see the early life of our protagonist, Witek, but only in fragments, and mostly in an unusual first person perspective. Then suddenly he’s racing to catch a train and from there things take off.

If you haven’t seen the film yet, and you think you might ever watch it, stop reading now. It’s great, you should watch it, and I’m about to spoil it all the way up.

From here we see three different ways his life might play out, all based on whether he makes the train, and if not how he misses it. In the first reality he makes the train, quits medical school, joins the communist party, and is eventually required to sell out his girlfriend and his principles.

In the second reality, he misses the train, collides into a station guard, and is arrested. While doing his community service he joins the underground, works distributing censored books, converts to catholicism and has an affair with the sister of a friend of his. Ultimately, he is falsely accused of betraying his comrades.

The third and final reality has him missing the train, not fighting with anyone, and running into his ex-girlfriend. He returns to medical school, marries the girlfriend, becomes a successful doctor, and neither joins the party nor the underground. He has kids, a wife, and a happy life, but pure accidental tragedy, in the form of an airplane that explodes shortly after take-off, strikes him down.

There are multiple layers to this narrative. On the one hand it seems to be saying that the happiest path is to be true to your own nature. He’s not temperamentally a communist, or a resistor, and the “best” life is the one where he does neither. On the other hand, even that life ends tragically. This is where the title comes in. The film layers the element of chance into the conversation. Both as a direct idea of a multiverse of possible futures, but also as a force that is disconnected from our own individual choices.

In other words, even when Witek makes the “correct” choice, he’s still subject to the whims of chance.

It’s a deep idea. The choices we make matter, obviously, but at the same time we cannot predict, or control, the future. Tiny, seemingly insignificant choices I’m making all the time, can have massive impacts on where my life goes. Still, my own choices only matter so much anyway, because life is going do what it’s gonna do, independent of my own agency. The only real advice the film maybe wants to give is to be true to yourself, because then at least you’ll enjoy the journey. - May 9th, 2020