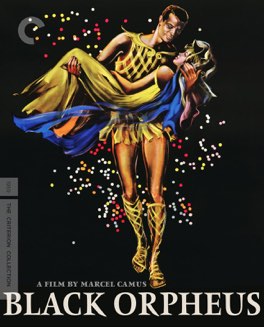 I know I mentioned that I don’t enjoy the Orpheus myth, but I enjoyed this nonetheless. A lot of that is the way it utilizes its setting, and how it celebrates the dance and the music and the people.

There is an inherent challenge that comes from watching so many of these films decades removed from when they were originally released. All too often, I am completely unaware of the politics that surrounded the film when it was new. In addition, because this is a journey through world cinema, I am often also lacking any depth of knowledge about the place the movie is attempting to portray. This can easily lead to me not realizing the problematic nature of what I’m watching.

One of the reasons that Criterion is as highly regarded as they are, is because of their devotion to the special feature. This is what creates the “film school in a box” reputation that the company rightly deserves. The supplemental material is there to help the viewer understand the greater context that a film is coming from, or to document its reappraisal. In most cases, the special feature helps me to find a way-in to difficult films. Often, if my enjoyment of the film doesn’t change, my appreciation for it will. In the case of this film though, the supplements largely attempt to do the opposite.

I am not Brazilian, but from what I can discern there is some debate about whether this film accurately depicts the favelas, or slum neighborhoods, that it takes place in. Some people seem to be arguing that it does, at least for the favelas that existed at the time of its release. Others argue strongly, that the film ignores the realities of the favelas, and instead paints an almost idyllic picture of them.

I am certainly not qualified to comment on this debate. What I find interesting, is that I think the whole thing kind of ignores the point the film is trying to make. This isn’t intended to be a realistic portrayal of anything. To argue about social realism in a film that features supernatural elements, and a lot of unexplained more-or-less magic, is a weird lane to take. This is intended to be a fantasy.

Does that absolve it from any complaints someone might have about it? Of course not. I’ve read that it’s an objectifying portrayal for instance, and I think that’s about right. - Apr 11th, 2020