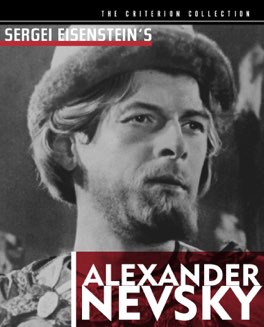 My first Eisenstein film is a great one. It was thoroughly entertaining, even with its rather overt message. Really enjoyed this.

All films are, in some sense, propaganda. If they’re attempting to do anything, say anything, or have any goal or point, then they are by definition putting forth some type of world view. Even if they seemingly have nothing to say, then they’re promoting the notion that cinema should be a mindless experience. Even a non-perspective is still, ultimately a perspective. We don’t talk about most films as propaganda, however, because we don’t think of things like life and love as political. They are of course, everything is political in some sense.

All film is also biased, towards the viewpoints of the people that made it. There is no way to avoid that. Art is created by people, people have opinions. It’s not possible to make something completely “objective.” That this is a “propaganda” film is, therefore, not really the issue. Of course it is.

The film shows a period in the life of the titular figure, who was a historical person. He defeated an army of Teutonic knights, and kept the city of Novgorod free from “foreign” rule. The perspective of the film is that the Teutonic nights were part of the German-speaking Holy Roman Empire, and this was made in 1938. Eisenstein hadn’t managed to release a film in almost 10 years, and this was a very safe choice to not get dinged by the censors. This is a film intended to rouse the passions of Soviet citizens to the upcoming danger of Nazi Germany. Even then, apparently an entire reel was removed, possibly because Joseph Stalin didn’t like it.

In its role as a rousing call to self-defense it works incredibly well. Too well for the authorities actually. After the USSR signed a non-aggression pact with Germany it was quickly removed from circulation. It only came back after Germany invaded and war broke out between the two countries. It works as a rallying cry because it’s so wonderfully made, with a final battle that is absolutely thrilling. Parts of the non-fighting are a bit stilted, and formal, but it’s also full of little moments that work to break the tension. It’s just a really fun film, and also one that kind of makes me want to defend my house against anyone trying to invade it.