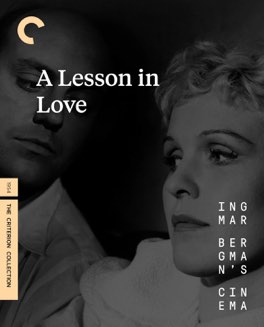 A supposedly minor Bergman film, but one that really resonated with me. I thoroughly enjoyed this.

A Lesson in Love

Leave it to Bergman to make a “comedy” that includes so much depression and admission of self-loathing. This is classic “it’s not actually funny” dark humor, and that’s absolutely my speed. According to Bergman himself, the premier audience laughed out loud at the screening. Other than a couple of moments of real humor, I find it hard to see how or why. But that doesn’t matter to me at all.

This tells the story of David and Marianne, a married couple who until recently have been in a mostly happy, mostly uneventful marriage. David is a gynecologist and one of his attractive young patients throws herself at him. They begin an affair. In response to this affair, Marianne rekindles a romance with the man she dated before her marriage to David, who used to be David’s best friend. The film is told in various flashbacks, but eventually we get all caught up, as do the couple themselves, and then we see what happens next.

There are several facets to this film that I find interesting. The first is the degree to which this all feels pretty autobiographical for Bergman. He was married numerous times, had numerous affairs with co-workers, and regularly used actors in his films as stand-ins for himself. David’s declarations of self-loathing, his smug superiority, his inability to say no to the affair, and his self-belief that he could fix everything, all smack of Bergman’s own psyche on display.

The second thing is the declaration by David, that long-term relationships need occasional chaos or they wither and die. Certainly he seems to believe what he’s saying, although it’s equally true that it’s an extremely convenient way to excuse his inappropriate behavior. It’s an interesting idea though. I think the main pitfall in keeping relationships going is to avoid growing distant and apart. It’s easy, once careers, and children, and the world get involved, to put an otherwise working relationship on auto-pilot and assume it can be resumed whenever.

The problem is that when whenever comes, you may find that you have grown so far away from your loved one that you are no longer a good match, or even find that you don’t really know them anymore at all. It’s something I very much strive to avoid, and perhaps that’s why this film was so interesting to me. That and that I absolutely love the type of misanthropic cinema that Bergman did so perfectly. - Jul 10th, 2020