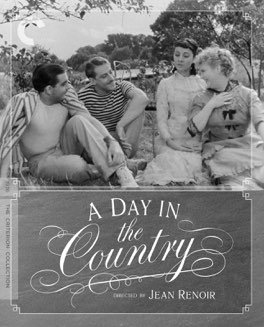 I get why people are so enamored with this. It is beautifully shot. Love affairs in a lot of thirties cinema are just a bit too rapey for me, it completely ruins the piece.

A Day in the Country

One of the challenges of watching films from so long ago, is that the ideas of contemporary society may not line up well with the ideas of the past. Morality has evolved, both for good and bad, and things can be mismatched. Things that were ok to say and think in the past might feel very inappropriate today, and vice versa.

At the same time, somethings that were perhaps commonly seen in old cinema were wrong even in their own time. This is why streaming services are starting to include disclaimers before some of their older titles with the phrase “they were wrong then and they are wrong now". The racist Japanese caricature of the neighbor in Breakfast at Tiffany’s, for example, was offensive at the time. Japanese-Americans were upset about it then. It isn’t a case of “well, that’s just how things were back then".

This film is about a petit bourgeoisie Parisian family who decide to take a trip to the country for some air. A father, a mother, a daughter named Henriette, and the daughters bumbling more-or-less fiancé. They stop to eat at a little restaurant, and there they meet two young men who have amorous intentions towards the wife and daughter of the family. Through some clever scheming, they manage to get the two ladies alone. From there, Henri, the one who is interested in Henriette, pressures her into heading into a secluded wood. He tries to pull her into an embrace, which she repeatedly rejects. Finally he forces her to kiss him, she eventually acquiesces, and they have sex. Finally the film shows an epilogue, where Henriette has married the bumbler and is with him on the spot where she was assaulted. She runs into Henri and they share a tearful moment as to what could have been between them, before Henriette heads back to her loveless marriage.

I get that there was a certain idea in prior society that no didn’t always mean no. The idea that women would protest advances that they actually welcomed, at least initially, in a sort of gross charade that proved that they were protecting their virtue. One could certainly read this story through that lens, but I don’t think there’s enough in the actual film to justify that. What we have is a very clear series of non-verbal attempts by Henriette to stop Henri’s advances. He doesn’t listen. What’s left is a sexual assault that she eventually stops resisting. The fact that Henriette’s later life is so sad and vapid that she looks back fondly on this moment doesn’t change my experience of feeling sketched out by it.

There are certainly plenty of films from the thirties with this kind of vibe. But there are also plenty that don’t have it, where the romance is completely consensual. So, it isn’t a case of “this is just how things were back then". This was a choice, and I don’t like the choice, and I can’t get past that distaste in how I view the rest of the piece. - Dec 15th, 2020