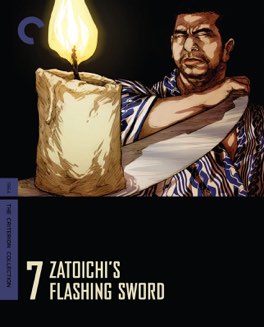 This is the seventh film in this series and I’m still finding so much to enjoy. The plots remain hilariously complex at times, but as long as the series focuses on exploring the central character, I’ll keep enjoying it.

We’ve arrived at the point in this saga, where Ichi is so powerful that the story can’t really revolve around certain kinds of obstacles in his way anymore.

It doesn’t really matter how many enemies he has, he will easily defeat them all. No direct attack matters. Instead the story around him is the focus, and what it compels him to do. It becomes almost a character study.

At the beginning of this story Ichi is shot by someone from one of the Yakuza gangs, and mildly injured. His life is saved and his medical care is provided for by a mysterious woman.

Wanting to repay her, Ichi travels to her father’s house, who turns out to be a sort of good Yakuza boss. He’s in a feud with a much worse boss, who wants to get control of a river crossing so he can gouge the local population.

Ichi decides to repay the kindness the woman showed him by helping her father. Eventually the guy who shot him comes back, and an elaborate endgame is constructed.

Ichi simply wants to do the right thing. His general humaneness persists, even as he is now an unstoppable killing machine when provoked. His story is one of an inability to find a place where he won’t be hassled.

He wants nothing more than to settle down, maybe find a wife, raise a family. That’s not possible for him. Partially because of his status as a blind masseur in feudal Japan.

But mostly it’s because he’s already in too deep with the Yakuza, and wherever he goes those problems will eventually catch up with him. It’s a bit like a much more emotionally rich A-Team, and I remain completely here for that. - Nov 25th, 2019