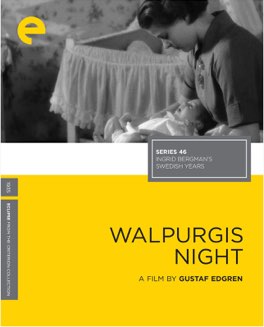 I absolutely hated this pile of misogynistic garbage. The fact that some people still think like this is the worst part of all.

This film is complete trash, and we would definitely not be watching it anymore if it didn’t star Ingrid Bergman, and to a lesser extent Victor Sjöström.

Its message is abhorrent, but what’s worse it’s also just boring. I found myself longing for the end, even as theoretically interesting things were happening. I’m sure that’s partly because by the point the plot heats up I was already so disgusted by what had already happened.

There is almost nothing to recommend about this film.

I don’t know if in 1935 it was considered radical to suggest that love would solve a country-wide low birthrate. I do know that a film that suggests that woman can only be fulfilled by becoming a mother, or that any woman who has an abortion is a whore, isn’t one I’m likely to enjoy.

What’s truly upsetting, is that a lot of the views of this film are still held in too many circles today. It would be so much more comforting if we could watch this and merely laugh at the follies of the past.

Unfortunately, the line from something like this, to something like The Handmaid’s Tale seems upsettingly short. The only good thing I can say, is that it’s another film that I didn’t hate Ingrid Bergman in, so maybe she’s finally growing on me a little bit. - Aug 21st, 2019