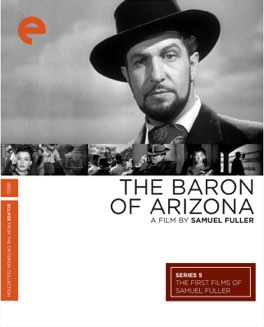 I really like these weird little films. Especially when they involve real history in some fashion. Things dragged a bit after the planning was done, but I still found enough to enjoy.

The Baron of Arizona

I have a strange love for people who are unreasonably and irredeemably bold, even if that boldness comes in the form of a swindle. Maybe especially if it comes in the form of a swindle. Certain kinds of swindles anyway. Pure money grabs are of no interest, and usually involve hurting innocent people. But a certain kind of insane plan, one so audacious that it cannot possibly succeed, can draw me in. This film is about one of those.

It’s based on a true story, although the details have been altered in big and small ways. This is the story of James Addison Reavis, who conspired to commit one of the most massive frauds in the history of the United States. Essentially, he attempted to have himself named the Baron of Arizona, and in so doing inherit all of the land in the state. His plan was based on a treaty the United States had, recognizing all land grants given by the Spanish kings in the period of Spanish colonial rule.

He forged documents, planted monuments, and even convinced a young child she was a baroness. Obviously it didn’t work. After all, Arizona is a state, and not the Barony of the de Peralta family. But what an insanely ambitious plan!

I mean... I think most people would try to get a sizable chunk of land. Enough to be well-off, or even rich. But to claim the entirety of the territory of Arizona as your inheritance, based on forgery and fraud? It’s incredible. The audacity of it is just miraculous to me. It doesn’t hurt that I am a major Vincent Price fan either, he makes the Baron seem so damn cool. My only real issue with this film is a strange one, given that it seems like a totally unnecessary change from what actually happened.

In the film, Reavis finds a young girl with no parents, and convinces her and her guardian that she’s actually the heir to the state of Arizona. Then, when she’s old enough and he’s finished planting the evidence, he marries her so he can use her lineage to get what he wants. The young lady herself has of course fallen completely in love with him, and so goes along with all his machinations. This is so creepy. He grooms this young girl for most of her life and then marries her. It’s inappropriate and disgusting.

To add to the situation, in reality he met a grown woman on a train who resembled the fictional previous baroness he had created and wooed her over many months. He did lie to her and convince her she was a baroness, but at least she was a grown-up when he met her! - Feb 8th, 2019