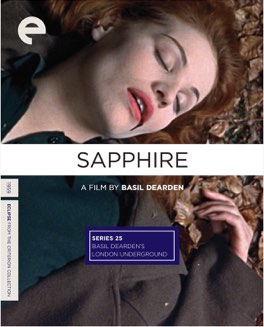 If this is what the cinema of Basil Dearden is like, sign me up. I enjoyed this thoroughly. Then again, this is exactly my kind of thing.

This is probably not a film for everyone, if such a thing even exists. I can see how some people would say it’s overly didactic, with an obvious moral message. I can see how it could come across as dated to someone. I get all that. But I don’t care, at all. This is most definitely a film for me.

This film tells the story of Sapphire, a mixed-race woman who has been “passing” and has now turned up dead. The suspects range from her boyfriend, to his family, to her exes, to a random killing. The film follows two detectives as they try to bring her killer to justice. Along the way we learn a whole lot about racial tensions in England in the late 1950s. This film was apparently inspired by the then recent Notting Hill race riots.

I love a good whodunnit. It’s a genre I usually enjoy. Give me a classic police procedural, with a mixture of detective work and twists, and I’m sold. I’m a huge Sherlock Holmes fan for a reason. One of my favorite genres of television is do-gooders helping people solve crimes. This film, with its murder mystery, followed doggedly by two cops, through false leads and lying witnesses, is right up my alley. It is my alley. I have several homes in this alley, and have definitely investigated shenanigans that have occurred near them.

On top of that, as an ethnically ambiguous appearing person, who has been assumed to be many, many different things that I either am or am not, I can strongly relate to the central plot. The idea of someone discovering they can “pass,” and doing so, to a potentially disastrous end, is a storyline I can really relate to. It’s provocative for its time, but also I would argue this film actually hasn’t fallen out of being provocative even for now.

I can absolutely see this same thing working as a story today, with only a few minor changes. Which is a bit depressing really. Things have certainly changed a lot since the 50s, but also nowhere near enough. There is a moment in the film where one character is describing one of the policemen as “the type who always puts their hand out first, to let you know they will”, and I have been thinking about that nonstop since I watched this. - Dec 20th, 2019