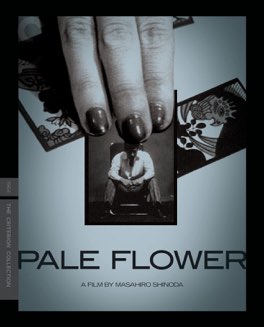 A beautiful film that left me surprisingly cold. I’m not sure if I just wasn’t in the right place to watch it, but I was honestly somewhat bored.

What is it about mutually self-destructive love that can make it come off as oddly romantic on film. Certainly it’s not romantic in real life, it’s just sad. But when it’s two beautiful people, who are drawn together but destroy each other, and the whole thing is staged, it can be magical.

I suppose maybe it has to do with love in the face of obstacles that cannot be overcome. But what about when it isn’t even love, it’s just lust, or mutual fascination? Why does that have the same potential effect?

This is the story of Muraki, a Yakuza enforcer who has just gotten out of jail for killing a member of a rival gang. He seems completely unimpressed with his freedom, falling immediately back into a lazy life of gambling. He has a girlfriend of sorts who has waited for him, who he doesn’t seem particularly interested in. He doesn’t seem to care all that much about his gang, or himself, or really anything else. Then he meets Saeko, a young woman who clearly comes from a different segment of society, but who is drawn to experiencing greater and greater illicit thrills.

They fuel each others self-destruction to somewhat predictable ends.

One thing I found novel about this particular tale of mutually assured destruction is that the two people at the center don’t seem to have any level of physical relationship. We never see them kiss, let alone do anything more than that. Their entire relationship seems to be consummated through their shared gambling adventures, driving around in Saeko’s fast car, and other things like that. I can’t remember another movie that tells a love story in that particular way. It gives the entire thing an extra level of detachment.

I don’t have any real answers for the questions I’m asking. I suppose that’s one of the things movies are for ultimately. To allow us to vicariously live out lives that in reality would be unbelievably depressing, dangerous, or unpleasant. I do not want the life of anyone in this film, but I can still find the whole thing alluring in some remote unknowable way.

We are, as a generality, attracted in this world to self-destruction. It’s a bit worrying, but I suppose at least this is only on the screen, and not in the newspapers. - Mar 15th, 2019