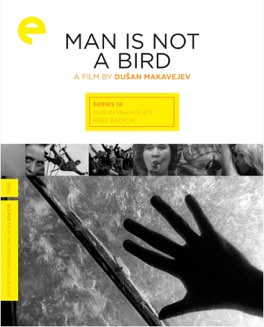 I really enjoyed this. It’s my first by Makavejev, and very different from what I was expecting. It was an interesting story mixed with some more experimental elements and I liked all of it.

Man is Not a Bird

When contemplating a film there are many different angles one can take. One of the hardest to be aware of when watching old films, is the historical and cultural context it’s coming from. This is true even when the film comes from your own country, and from areas of that country and people of that country you are familiar with. It’s so much harder when it comes from another part of the world, in another language you don’t speak, about a time period you don’t know that much about.

Luckily we have the internet these days, and therefore one can learn. From doing some reading, I learned that this movie was something of a subversive take on the realities of mid-sixties Yugoslavia. Thinking about what happens in the story I get why. This film shows an industrial town, and working class people, just as people. They have foibles, they are not perfect, they are sometimes awful.

If you’re an American film watcher in 2019 that might not seem like a big idea. For a Soviet era film from Yugoslavia that was huge. Films about the common people in that era portrayed them as larger than life heroes, who were only interested in serving the interests of the state, and who could do no wrong.