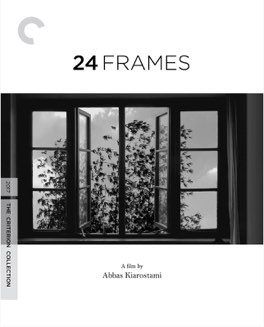 Another wonderful film from one of my favorite directors. So completely unlike anything else of his I’ve seen, and yet somehow also perfectly him.

I’ve been having a lot of trouble finding the time to watch these movies so far this year.

Part of that is my job, which is very far away from my house and therefore my commute is long. Part of that is that my wife and I are having a baby, and so the natural rhythms we had established in our relationship are changing. Part of it is a restlessness I’ve felt lately.

It’s been hard for me to find the calm space required to really be attentive when watching cinema. It’s a funny thing, because watching these films has been a major creator of that calm for me. It’s a large part of why I keep doing this.

Given all of that, this might seem like a strange choice to watch. It’s a film with very little obvious surface narrative.

The conceit here is that Abbas Kiarostami took twenty-three of his photographs, and one famous painting, and digitally modified them to show what might have happened before and after the shot was captured.

The film has no dialogue, but there is music sometimes, and the sounds of nature are persistent. It’s a bit like one long experimental film.

There is a tension here that’s very interesting. The idea that this is what happened before and after the shots were taken is, of course, not literally true.

Kiarostami took the photographs, so only he would know, but I’m very confident that he wasn’t simply recreating a scene that happened in front of him.

So what we have is something else, an imagining of what could have happened, rather than what did. On that level it’s fascinating to see what’s coming next, and to try to figure out what any of it might mean.

On a practical level though, this was actually maybe the perfect film for me to watch when I did. It’s both requiring of extreme attention, and also really not.

Kiarostami famously said that he wouldn’t mind if someone fell asleep for part of the movie, as long as they experienced something.

It’s a film that allows the viewer to fade away into thought, and then come back to what’s actually happening on screen. In that sense, it was a wonderful way to find my way back into the almost meditative state that the best films can create for me. - May 11th, 2019