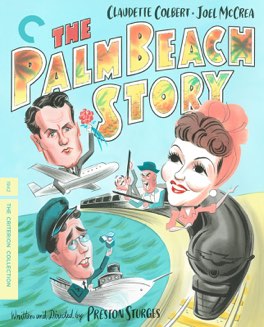 A wonderfully funny and witty film. I absolutely adore Claudette Colbert, and she was utterly perfect here. I can’t believe I waited so long to watch it.

I’ve been putting off watching this for a long time, and now I feel so silly. The reason was simple; I don’t like films where the main plot point consists of information triangles, or situations that hinge on the audience knowing something that the characters do not. I am so frustrated at films that circle around the characters, constantly having everyone a step behind. I don’t like love triangles. I don’t enjoy knowing more than the characters, I’m just annoyed that they are so in the dark. It’s just not a style I like.

This film tells the story of Tom and Gerry, who are married and struggling with money. Tom has a ridiculously cool, but I would imagine impractical in several ways, idea to build airports above cities with stretched out nets. He needs $99,000 to build a prototype, and until he has it he’s barely paying his bills. His wife, Gerry, is accustomed to the finer things in life and isn’t getting them with Tom. She decides that in order to save herself, and him, from ruin, she needs to leave him and find a rich man to marry. Then she can convince her new husband to give her old husband the money. She leaves on an adventure to get a divorce and marry, and he follows her, trying to win her back.

It’s a screwball premise, if ever I’ve heard one, and it works fabulously. The film is just so damn funny. It’s nothing at all how I expected it to be, or how the summary on the back of the box led me to believe it would be. This is not an isolated problem. The synopsis on the back of the box is the only way the packaging has to try to sell me on these films. That text, along with secondary factors like length and country/language of origin, are how I make the choice of what to watch when. A summary that gives me a bad feeling, or that makes me think I won’t like the film, can delay my experiencing it for a long, long time. I don’t think there’s anything that can really be done about this, except for me being more adventurous in my choices.

I do want to mention one negative thing about this film before I leave it. There are representations, at several points, of African-American characters. They are universally servants, or porter car men. They aren’t the worst depictions I’ve seen in film from this era, but they aren’t great. The way the men and women talk, and the things they’re given to say, are stereotypical and shameful. I cannot watch the media of the past without being affected by the long list of offensive choices that were made. Having said that, everyone has a tipping point for how much they can bear, and this film remained ok for me. It was an upsetting part of the experience, but it didn’t ruin the whole. That’s just for me, others will certainly vary. For example, I know many people love Breakfast at Tiffany’s, but I simply cannot look past the racist depiction of Japanese people. That for me, ruins the whole. - Oct 7th, 2018