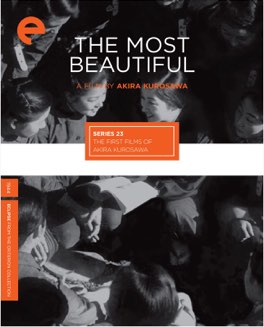 Way more emotionally affecting than I would have ever imagined. I found myself really invested in what was happening, and moved by the whole thing.

This is how a film that is overtly propagandistic, for a cause I strongly don’t support, can still win me over almost completely. Not by talking about an evil enemy. Not by attempting to show war as a positive force, or with grandeur. Not by polemical appeals to some ideal or authority. Simply by focusing on ordinary people, and by making their small sacrifices seem as large as any battle could be.

This is the story of an optics factory, producing lenses for the Japanese war effort. The factory is suddenly required to produce far more than normal, and a production increase quota is called for. Originally, the men are required to produce 100% more, and the women 50%. The women rally together, and demand that their quote increase to 66%. THe rest of the film follows the group of young women, and especially their leader, as they attempt to fulfill their quota.

The obvious sexism aside, it’s a powerful story. The film focuses on the various challenges faced by these women, as they work themselves to near death, in order to produce enough lenses. There are almost no men in the film. Where they do show up, they are used purely as background instruments to tell the story of these women. It’s powerful, even as I’m reminding myself that the whole thing was made in service of a militaristic society engaged in an incredibly destructive and pointless war. The war is so off screen, it allows the characters to be the focus instead, and I ended up feeling for these women. - Jun 29th, 2018