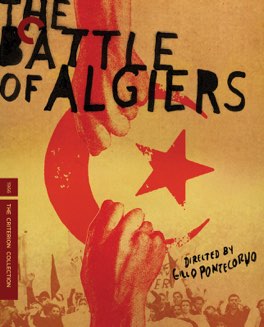 A remarkable film, and one that hit me very hard. I’m still processing all my thoughts, but I know I’ve never seen anything like this before.

The Battle of Algiers

Curious as to what the negative reaction to this film might look like, I read some of the one star reviews on Letterboxd. Within a brief span I found someone saying they watched the film shortly after 9/11/01 and how could they possibly sympathize with Arabs, no matter the circumstances. At the same time, I found someone else who said the film was appalling because it was attempting to create sympathy for the French, and how could anyone have any sympathy for a colonial population. You could argue this shows the film is balanced. I would instead argue it shows the continuation of our society’s descent into viewing everything as teams and sports.

This film tells the story of the eponymous battle of Algiers, which was an ongoing fight in the late 1950s and early 1960s between Algerian groups attempting to gain independence and French colonial forces attempting to stop them. The film is made in a documentary, newsreel style, showing various events from that struggle. Because the film stars one of the actual leaders of the Algerian FLN, a man named Saadi Yacef, the filmmakers got access to an amazing amount of extras, as well as many of the actual locations where the events took place.

I happen to know the filmmakers were firmly on the Algerian side of the issue, thanks to the many interviews and documentaries Criterion includes with this film. They do a phenomenal job of showing both sides acted with atrocities, and with methods that are totally inhuman, immoral, and illegal. The film isn’t showing these to make some argument for moral equivalence though. As the screenwriter says, in an interview in the booklet, war itself is inhuman and immoral, and should be illegal. Once you are committing acts of war, you are inherently committing acts of evil, and from there it’s just a debate over degrees. Things like the Geneva convention, or the “rules” of honorable combat, are perhaps helpful in minimizing the evil, but it’s all a charade intended to try and legitimize the unlegitimizeable.

Both sides in the conflict commit barbaric and unconscionable acts, but their initial positions aren’t equal. The French arrived in someone else’s land in 1830, conquered it through military force, and have been occupying it for 130 years. They are trying to maintain their colonial holding. The Algerians are attempting to get the French to give them back their country, and allow for their right to self determination. Additionally, the French have all the power to make the rules. When the Algerians attempt to achieve their liberation inside the French rules, the French just change the rules to make that impossible. Ultimately, the violence on both sides in abhorrent and unforgivable, but the responsibility of the parties is simply not even. The French are the reason this is happening at all.

The film reminds us we need to look at the situation itself, and not simply pick a team and say anything they do is justified. Both sides act in ways that cannot ever be justified. This is a complex issue, and it exists on at least two levels. On the one hand, supporting anyone who is bombing, killing, and torturing innocent people, is completely wrong. How can we possibly support that? On the other hand, both sides are doing it, and both sides are having it done to them. I sympathize with the Algerian prisoners, the innocents being exploited, the country being destroyed. I also sympathize with the French students and children, who have done nothing wrong other than be in a public place where someone decided to set off a bomb. I have empathy for both, even while recognizing the Algerians were in the greater right, which doesn’t justify their actions, but it does justify their intentions. - Nov 12th, 2018