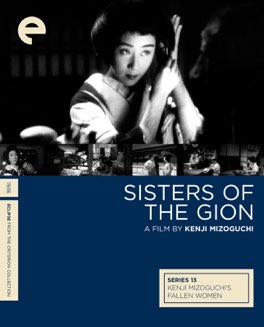 A remarkably frank and expressive film. This helped prompt a cultural reexamination of the practice of the geisha, and it’s not hard to see how.

Sisters of the Gion

The thing about exploitative systems of control, is that no matter what approach you might take in challenging them, if you’re already inside it’s usually too late. You can try to follow the rules of the system, but that path is intentionally designed to lead to ruin. You can try to buck the rules and make your own way, but that path usually just leads to ruin even faster. Once you’re unfortunate enough to be playing the game, you’ve already lost.

This is the story of two geisha, sisters, who live in a completely male dominated system of economic and social control. Strict rules govern their behavior, their choice of clientele, their dress, their actions, their entire lives. They exist to service the clients that come their way, and they are paid a non-subsistence wage for their services. Of the two sisters, one is obedient and docile, a perfect example of the geisha ideal. The other is willful and headstrong, determined to play the system to her advantage, and to get her and her sister out of their circumstances. The film follows their lives, showing why both approaches are ultimately futile.

Systems produce what they are designed to produce. The geisha system in Japan in the 1930s was designed for the subjugation of women by men. It was designed for the women involved to have absolutely no path out. The naive and docile sister attempts to go along to get along. It doesn’t work. Her clients abandon her the instant they find something better. The other sister attempts to make her own way, damn the consequences, and it nearly gets her killed. The point is that the only way to win a game like this is to be lucky enough not to have to play in the first place. - Jul 14th, 2018