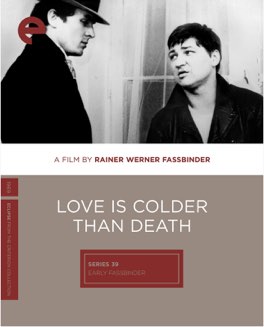 Not a great film, but one that’s definitely worth experiencing. If nothing else, there are a variety of truly great shots, and some audacious staging.

Love is Colder Than Death

First films are often a bit of a mess, and this is no exception to that generalization. Everything filmic about it feels like it was made by someone operating on a shoestring budget, and with virtually no idea what they are doing. The sound is bad, the dialogue is cheesy, the story makes very little coherent sense. The acting is almost uniformly mediocre and the sets look like someone’s apartment was used. When watching a first film like this one, what I look for is whether you can see the seeds of what was to come. In this film you definitely can.

The film tells the story of a street pimp named Franz, who has been approached by some sort of crime syndicate, to work for them. He is an independently minded criminal though, and doesn’t want to join up. While in their custody he befriends another detainee, named Bruno, and tells him to look him up in Munich if he ever gets out. When Bruno does indeed get out, he joins up with Franz, and his prostitute girlfriend Johanna, and they embark on an incoherent crime streak. Eventually they decide to rob a bank, and that’s when everything comes to a head.

The film is openly inspired by, and an homage to, the French New Wave films of directors like Éric Rohmer and Claude Chabrol. You can immediately tell. This is sort a German variation on a theme. It’s also full of Fassbinder’s style. Where the French films are beautiful, this film is dirty. Where the French films have character development, this has almost none. Still, there’s something there. It’s a spark of what was to come. It’s something in the occasionally astonishing camera work that indicates that there is an artist at work here, who has his own point of view. I’m looking forward to seeing how that point of view develops throughout this set. - Sep 19th, 2018