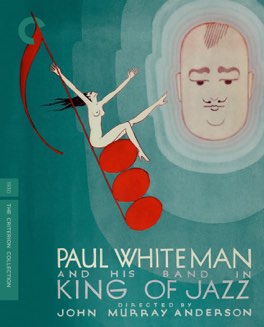 This film is a lot of fun. It’s fun with a significant side dish of ignorant out-dated ideas though, so buyer beware. I enjoyed it, in spite of those things.

As the host of the sadly currently on hiatus podcast A History of Jazz, I was both nervous and excited about watching this film. I’m painfully aware of the history of Paul Whiteman, the Jewish-American so-called “King of Jazz,” who mostly didn’t play jazz at all. Whiteman himself is a fascinating figure. He was never foolish enough to believe this title he had been given, but at the same time he took complete economic advantage of it. He acquiesced to the demands of the venues he played not to hire African-American musicians, but hired them to write music for his band anyway. He’s an important touchstone in the history of the jazz of the 1920s and 30s.

The film doesn’t really deal with any of these things. Instead it’s a revue, a format which was big in Hollywood around this time. A revue is a film that presents a bunch of small sketches, with musical numbers, and set pieces. As a format, I quite enjoy it. Even if something is a bit boring, you don’t have to wait very long for something else to start. That’s especially important in a film like this, where the quality and interest level was highly variable. Some of these sketches were insanely fun, others were boring or maudlin, and a few were highly retrograde in their overall politics and ideas. I honestly wish this format, minus the outdated ideas of course, would make a return. I’d love to see a couple good new revues.

Nowhere in the film are the out of date politics more apparent than in the final number. It’s meant to pay homage to the idea that America is a melting pot, one that was uniquely suited to the creation of jazz music. That’s a really nice idea, and could have been astonishingly good. It would have been made especially amazing by the incredible set that was built for this film, apparently the largest indoor set in the history of cinema. The issue though, is that the only nations that were included in the melting pot that created jazz were European nations. England, Ireland, Scotland, Spain, Italy, Germany, France, and Russia are apparently the only places we need to look to if we want to understand how jazz came to be.

This is nonsense, of course, but it was sadly too common a theme in the period this film was made in. The only person in the film to acknowledge the actual history of the music at all is Whiteman himself, but even that was only in one throwaway comment before an awkward dance number by a supposed “African.” When watching things from the past, it’s always a battle between appreciating what was great about the thing, with being made uncomfortable by the ideas the film might contain. This is definitely no exception. For me, there was still enough other stuff to enjoy that I’m glad I saw it, but I could totally understand someone else finding that equation resolving differently. - Dec 28th, 2018