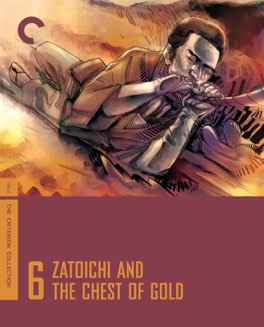 A high point after a couple of less impressive efforts. That this series can still deliver like this, so far in, is impressive itself.

Zatoichi and the Chest of Gold

This ongoing series of samurai serials represents an interesting view into how long running franchises evolve. A bit like the current Marvel Cinematic Universe, only if they were all Iron Man films staring Robert Downey Jr. This is the sixth entry in the series, and while they were never exactly realistic, we are now firmly entrenched in superhero mode.

That’s not inherently a bad thing of course, it’s simply a story tool that can be used for better or for worse. This installment marks two interesting developments in the franchise. The first is that it’s the most cinematic of the films thus far. The improvement in the basics of filmmaking is intensely noticeable, with a lot more flair and flourish than previous entries had.

The second development is more interesting. Zatoichi has always been a humanistic series, but this is the first entry that really felt political in nature. The story here is as convoluted as I’ve come to expect, but the basic idea is that the titular chest of gold is full of tax money. Various villages have finally raised enough ryō to pay off the local intendant.

As Ichi arrives, the gold is stolen from the villagers, and, although he is innocent, Ichi feels responsible enough to pledge to get it back. Ultimately, it turns out the whole thing is a scam by the intendant himself. Along the way there’s a lot of commentary on the fate of villagers, and the corruption of their financial system. It’s nice to see these films doing more than just showing an awesome invincible swordsman, but rather dealing with real ideas. - Nov 17th, 2017