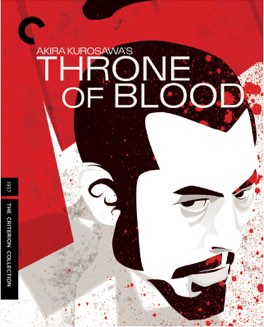 An unbelievably stylish and entertaining film. The entire thing is so well done. It’s also really nice to see a Kurosawa film of a reasonable length.

So a great book does things only books can do. It’s the same thing for comic books, television shows, and staged theater. To move something great from one medium to another requires a balancing act.

This is a masterful adaptation. In this case it’s of Shakespeare’s Scottish play Macbeth. What makes this adaptation work so well, is Kurosawa adapts not just to a new medium, but to a new culture as well.

He moves the story of Macbeth from its own period in Scottish history, to a similar period in Japanese history. And along with the setting, he also takes advantage of the art forms that go with it. In this case, that means embracing the look and feel of noh theater, as a replacement for the look and feel of English theater.

It’s remarkable how successful it all is. It’s made even more remarkable when you consider Kurosawa abandoned all of Shakespeare’s dialog, which is probably the main thing people associate with the brilliance of Shakespeare.

Instead he retains a great story, and makes it work in his new setting and medium. It’s a masterclass in how to be inspired by a source, use it to your best advantage, but not get dragged down in obsequious adherence to the original material. - Dec 24th, 2017