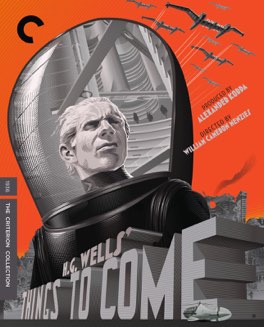 A visually stunning and thoroughly entertaining film. Ultimately I take issue with it’s world view, but I still enjoyed getting to see it.

There’s something both prescient and troubling about this film. Its predictions of war and suffering look naive with hindsight, and yet it’s predictions about humanity’s need for conquest looks disturbingly accurate.

Are we a global society dedicated to progress? Clearly not. Is that a bad thing? I’m not sure.

This story starts in a generic imagined 1940’s English town called Everytown. War is breaking out, with an unnamed adversary, and the country is mobilizing. From there we see decades of strife. This war doesn’t fully end until the 1970s, and even then it lingers.

What’s left is an undoing of progress. People live in an almost medieval fashion. There is a wandering sickness, that kills about half of the global population. Society is left to warlords.

From out of that chaos, a group of scientists attempts to build a better world through technology.

I think the film wants me to be rooting for these scientists and their technological future. It’s a tough sell. They are as arrogant and unconcerned with people as it’s possible to be. They come off as uninterested in the natural world, viewing the Earth as simply resources to be used. They are disconnected with interpersonal connection, and patronizing to those that disagree with them.

They certainly do a poor job of selling me on their supposed utopia.

It’s a very 1930s attitude to view technology as the solution to all of life’s problems. There is a certain type of person who believes that everything, and anything, can be solved this way.

Technology is neither good or evil. It’s simply a tool. All tools are shaped by whoever is using them. Without first solving the problem of people, technology accomplishes very little to improve things.

On the other hand, in the future we’re all dressed like ancient Greeks apparently, so that’s cool. - Feb 27th, 2017