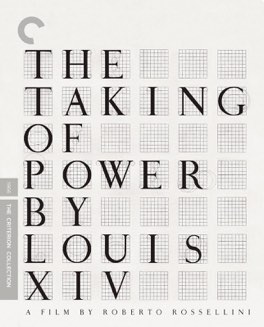 History is my favorite subject, so this feels like a film made just for me. It’s beautiful and covers a fascinating time period. It’s an exciting look at how politics works. I finally found a Rossellini film to love.

The Taking of Power by Louis XIV

This film tells the story of the titular Louis XIV, the “Sun King,” and holder of the record for longest reign of a sovereign ruler in European history. In particular, the film tells a specific part of that story. It’s the moment where Louis decides to take direct control of his country, after the death of his chief minister. The film shows how he manipulates the French aristocracy into supporting his personal rule, as well as how he controls them after he takes over.

It’s fascinating that the methods Louis used, were ultimately the seeds of his family’s downfall a couple generations later. His method of control, that of conspicuous consumption as a distraction, worked brilliantly as long as he knew what was really going on. When his descendants fell into actual participation, instead of staged participation, they got their heads cut off by the French people. There’s a lesson here about the means of control, and how they cannot last forever.

This also fell squarely into my current luck of watching films at a synergistic moment for me. I’m a huge fan of the podcast work of Mike Duncan. In fact, his The History of Rome was a huge inspiration for my own A History of Jazz show. I’ve been listening to his new show, Revolutions, lately, and this film is an almost perfect companion to his series on the French Revolution. It’s really fascinating to see how this all played out, in the years after the death of Louis XIV. - Dec 1st, 2017