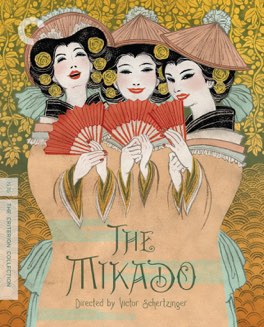 A beautifully appointed film that I absolutely loathed. It’s a textbook example of how insultingly limited the history of representation in western film has been.

There is, rightly, a lot of talk lately about representation in film. Specifically, about the hiring of European-American actors and actresses for roles in adaptations of stories originally featuring characters from other parts of the world. It’s instructive to see how far we’ve come in this regard. This film, which is a mostly faithful adaptation of the Gilbert and Sullivan opera, features a grand total of zero Japanese people. It’s 100% British, all performing in a stereotyped and ridiculed version of a supposedly Japanese story.

I hated this film. It was truly a chore to watch through. I found the story insulting and the characters racist. The songs bored me and the plot itself was vapid. The only thing I enjoyed at all was the staging, which was an interesting mixture of stage and film setting. I thought the sets were well done, even as they were inappropriate. Everything else made me angry, and reminded me of a past that is sadly too reflected in our present.

If we had truly moved beyond this sort of thing. If I wasn’t hearing that characters needed their ethnicity altered so that films could make money. Perhaps in that world I would regard this as quaint. I could look at it and laugh and remark about how far we’ve come. But I don’t live in that world. So instead I see this as a monument to both the progress we’ve made, and how much more work needs to be done. I’m not interested in judging this film from a modern perspective, but that also doesn’t mean I need to enjoy watching it. I didn’t enjoy watching it. At all. - May 11th, 2017