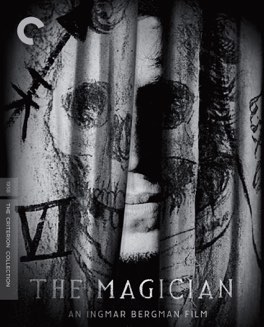 Another of Ingmar Bergman’s comedies. I enjoy these, even if they are slightly less important to me than his dramas. It’s gallows humor, and it’s great.

Film is, at its very core, a deceptive medium. Its entire purpose is to inspire something in its audience. Sometimes it’s humor, sometimes it’s fear, sometimes it’s to wake them up, sometimes it’s to make their sleep as comfortable as possible. In all cases, in a very literal sense, it’s creating an atmosphere that is demonstrably fake. The entire process is a ruse, and, more than that, it’s a ruse we are all complicit in.

This film tells the story of Dr. Vogler, a supposed practitioner of “animal magnetism,” a form of magic that’s never really explained. He is traveling around with his troupe, including his wife disguised as his male apprentice, and his grandmother. They are charlatans, and they are wanted by the law for their deceptions. Eventually they are brought to the house of a consul, where the chief of police, and a royal scientist, have gathered. They are forced to perform, in order to settle a wager as to whether they are legitimate or not, in a larger argument about the nature of science and mysticism.

The film does more than simply point out that all story is in some sense deceptive. It also examines the relationships between the deceived and the deceivers. There is an early scene where the troupe is attempting to sell love potions to some maids in the house. The troupe is out of what they usually sell for love, and so sell random other potions they’re carrying. The maids act as though they absolutely believe in the potions, but are really using them to seduce the men they already have their eyes on. It’s a dance, where both sides are leading and following.

The relationship isn’t always so equitable. The wife of the consul is completely willing to believe in Dr. Vogler, because she has recently lost her daughter. She debases herself, in the hope that this magic is real. This is art as a responsibility. Film, and magic, have the power to deceive, but it’s not always with full understanding of the exchange. Vogler, clearly a stand-in for Bergman, is anguished over the power he wields over the gullible. He is profoundly uncomfortable with his own art, as we all should be sometimes. - Jul 2nd, 2017