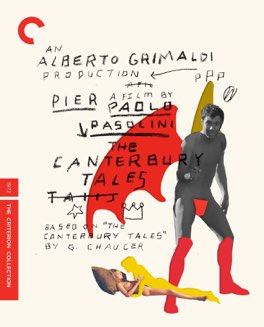 This film is a bit less cohesive than its predecessor, but still a whole lot of fun. I wish there was anything like this being made today.

The last week or so has been a rough one for me, with extreme moments of self-doubt and anxiety.

In many ways, I do this project because watching these films is a kind of therapy. I’m the type of person who is always thinking, someone who finds it difficult to relax.

Luckily, I find watching a film almost totally calming. For that period of time I can lose myself in whatever is happening on screen, saving my worries for when the film is over.

Without that affect, I doubt I’d have made it this far in this insane task I’ve chosen for myself.

I chose this film, because the last one was silly fun. In writing about it, I covered what Pasolini was intending to do, his retreat into an imagined golden age. I found that goal interesting, but the film itself was a trifle. This one is too.

Thank goodness for trifles. I love film that challenges me, that makes me think. It’s invigorating. But man oh man, sometimes it’s nice to just be entertained.

That’s what I needed tonight. Something silly, with little to contemplate, to provide a few laughs and a respite before bed. - Dec 18th, 2017