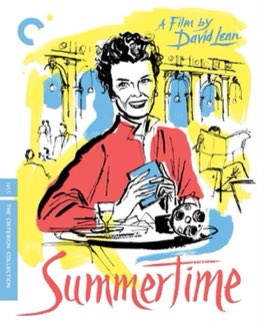 They filmed pretty much everything on location in Venice, and the results are visually stunning. I wish the plot of the film was anywhere near as wonderful as its setting.

On the surface, there’s something nice about a film that offers the possibility of a love story to an older woman. Too much of mainstream history has portrayed women over the age of thirty as essentially done with their romantic lives. These women are mothers, or spinsters, with very little in-between. To see a film from the fifties that challenged that narrative at all is honestly a nice find.

Unfortunately, much of that goodwill is lost on me, because of the nature of the love story our heroine, Jane Hudson, is offered. The man she meets on her trip to Italy seems superficially perfect for her. I say superficially because we never really learn much about him, other than that he’s interested. One of the only things we do learn, is that he’s already married. The message of the film is that Jane should accept his advances, regardless of her feelings on his marriage, because she’s too desperate to be picky.

That’s terrible advice! Jane is portrayed as so in need of love, so in need of getting her groove back, that it shouldn’t matter to her that this dude is scummy. She should just be happy anyone is willing to love her, impossible though that may be. It doesn’t help that the rest of the love story is so boring, and totally unremarkable, that I never felt any sincerity. Perhaps, in a different film, this could be a tragic tale of two people who cannot be together, no matter how much they want to. Instead I saw a smarmy married guy scheme his way into a sad and lonely women’s pants. Not exactly the stuff of legend. - Oct 23rd, 2017