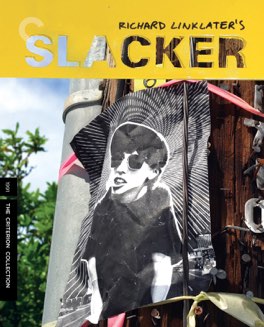 I enjoyed this quite a bit. The whole thing has a weird feeling of authenticity, even as it’s clearly staged. I suppose that’s what you get by using a majority of non-actors.

I really like films that aren’t about anything, but simply strive to give you the feeling of being in a particular time and place.

Slice-of-life films is the term that I’ve most often seen used. These types of films break down into many subcategories, of course, and this one is of the not-really-an-attempt-at-neo-realism variety.

This doesn’t play as a realistic look into anything, but more of a window into the feeling of something.

This film doesn’t really have anything like a story. As I said, it’s not really about anything in particular. I suppose it’s basically one day in the life of a tremendous amount of people living in late-eighties Austin, Texas.

We move from subject to subject haphazardly. Essentially, we get a vignette of varying length from each collection of people, all of whom have clever names in the cast list that summarize their mental state. Once the usefulness of a particular group is finished, we move on, rarely to return.

I didn’t live in late-eighties Austin, and I’m too young to have been part of this scene even if I had. What this made me feel though, is what it’s like to be part of any scene.

These kids are not so different from the personalities that wandered the landscape of my own twenties. I knew people just like these people, only completely different.

I’d imagine that anyone who was ever part of a scene, anywhere, could find something to relate to in this film. - May 16th, 2017