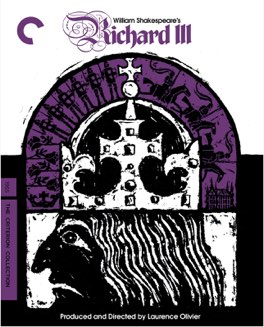 A marvelously well done film, full of incredible performances by some of the greatest Shakespearean actors in cinema history.

Believe it or not, I originally chose this film to try and find a respite from the news. It seems ludicrous now, this is the last film one should want to watch for that purpose, but I didn’t remember what the story was all about. The news these days feels overwhelming. It’s everywhere, and it’s mostly terrifying. In this world, watching these films has become a sort of sanctuary. They are a way to stop my mind from obsessively contemplating what’s happening all around me.

This is a faithful adaptation of the original Shakespeare. The film tells the story of Richard, Duke of Gloucester, at the very end of the Wars of the Roses. His brother Edward has just become King of England, and Richard himself a high minister. Life should be easy, but he’s unsettled in a peaceful world. He feels he is simply not made for peace time, but rather for strife and chaos. He has set his sights on the throne, and will remove any obstacles that are needed to achieve it. He’s a murderer, a sneak, a liar, and a hypocrite.

As I said, this was on paper really not a great choice for distraction. The parallels between Richard’s rise to power and our own current reality are not hard to find. It’s never been hard to find ways to connect him to fascism in general. From his pandering to the public, his using the clergy to convince the gullible, his dissembling, his honeyed lies, he’s the archetype of an evil ruler. It’s fascinating that he’s portrayed this way mainly because Shakespeare was writing in the time of the Tudors. They ultimately defeated Richard, and ended the York dynasty. He’s a caricature of evil because that’s what they needed him to be, in order to justify their own rule.

It shouldn’t have worked as a distraction, but it did. Mostly because I fell completely into the language itself. If you were to ask most people on the street whether Shakespeare was modern English, middle English, or old English, most would likely not pick modern. But he was modern English. It’s startling how far we’ve come in our language, to the point that it’s really quite difficult to follow along with what these actors are saying. I had to use subtitles, and really concentrate, to mostly understand. The effort was exactly the distraction I needed. - Feb 10th, 2017