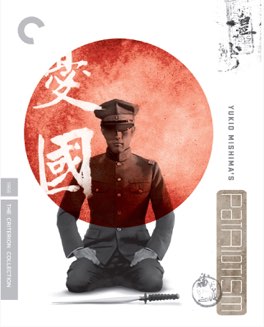 I was utterly captivated and also horrified by this film. It’s stunning, and unforgettable, but also such a clear cry for help that it hurts.

The meeting of art and psychological affliction is, of course, quite common. It takes a certain kind of person to be obsessed with creating things, and those people are often also burdened by the weight of life. It becomes an interesting question then; to what degree does our knowledge of the artist inform our understanding of their art? To put it another way, does the fact that Yukio Mishima killed himself in exactly the same way this film portrays change our opinion of the film? I don’t see how it can do anything else.

This is a short story about the ritualistic suicide of an army officer who has been part of a failed coup. His job is now to round-up his fellow co-conspirators, who were caught, and bring them to death. Unable to fathom betraying his former comrades, he decides the only path forward is to end his own life. His newly married wife agrees to do the same, and the film brutally portrays how they do this.

This film is clearly an early attempt to stage his own suicide. It casts that suicide in as honorable a light as he possibly can, and turns something absolutely barbaric into something almost beautiful. That’s clearly by design. From all accounts I’ve read, Mishima was preparing for his own death for a long, long time. Watching this version of it is a chilling look into the troubled psyche of a very talented artist. The fact that it’s beautiful owes to the talent of the artist, the fact that it’s horrible owes to his obvious need for help. - Dec 11th, 2017