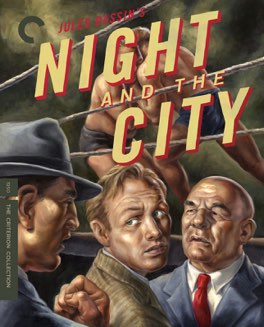 I really enjoyed this film. There’s just something about a good noir that’s so incredibly pleasant to watch. The dialogue, the situations, the lack of anything approaching a happy ending. I love it.

Night and the City

There’s something unsettling about seeing one of your own character flaws on screen. Even more so when it’s the mechanism of destruction for the film’s anti-hero main character. Luckily for me, in this case I’m well aware of the downsides of the flaw in question. Over the years I’ve come to the conclusion that the benefits mostly outweigh the negatives, but you have to be motivated in the right direction, and you have to pay attention.

This film tells the story of a low-level club tout, that is someone whose job it is to convince people to frequent a specific bar or nightclub. This tout is the sort of dream big, get rich quick loving, bound for glory or despair, type of guy. By the time we enter the story, he’s burned most of the bridges he has available to him. As the film starts, he lucks into what looks like the score of his career, the final gambit that will propel him to the easy life.

The character flaw I mentioned, is the ability to single-mindedly overcome any obstacle placed in the way of achieving a goal. I’m able to steamroll whatever is in the way between me and achieving something I really want. I’ll make whatever needs to happen, happen. I’m creative in figuring out possible ways around problems, and relentless in pursuing whatever it is I’m trying to accomplish. It’s often a useful skill, but it does come with one major downside.

In order to follow a path like that, you usually stop looking at anything like the big picture. You know you have an A and a Z, but you don’t really pay much attention to the consequences of what the B,C,D, etc. look like. The idea is, whatever happens, you’ll figure it out. You just need to keep moving towards Z. The problem there, is with the wrong goal, or a wrong step, it’s easy to get way off track, down a path you might not be able to come back from.

Ultimately, it’s a good skill to have, if it’s counterbalanced by the ability to pause for a second, and take stock of what’s going on. If you can do that, and I’d like to think I’ve gotten better at it over the years, then you’re probably ok. Without that ability, you can end up doing some very unfortunate things. It’s useful to have a story like this, to remind me of what the stakes really are. - Dec 16th, 2017