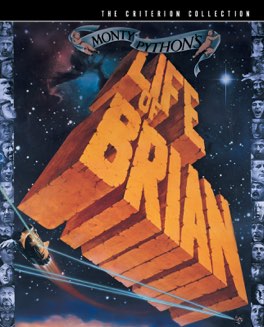 Not my favorite Python film, but still absolutely hilarious. There are some legitimately laugh-out-loud moments, and the rest is at least fun and interesting.

Judging a film, or any creative work for that matter, that you haven’t personally experienced, is dumb. That does not seem like a controversial position. To make blanket statements about a work of art you have only heard about, is also dumb. It’s therefore not particularly surprising, that such ginned up controversies usually look phenomenally stupid in hindsight. The nonsense surrounding the release of this films is one of those occasions.

This is, unsurprisingly, the story of a man named Brian. He’s an Israelite, living in Roman occupied Judea, born on the same day as Jesus. In fact, the three wise men of biblical fame initially mistake Brian for Jesus himself. Brian is, however, a perfectly ordinary person, who grows up hating the occupation, but otherwise not particularly religiously minded. When he reaches his twenties he joins a resistance group, and from there everything goes predictably goofy.

The fact that Christian groups boycotted this film on its initial release is, honestly, somewhat hilarious. This is a Monty Python comedy. It’s full of stupidly funny jokes, brilliantly witty bits, and nonsensical nonsense. There is absolutely nothing blasphemous about Jesus, or Christianity, in the entire thing. If anything, the film is far more potentially offensive to Jewish people. There were moments where I felt the prod of the humor, even as I enjoyed all of it. But the idea that any Christian person should be seriously offended by this film is absolutely ludicrous. - Dec 27th, 2017