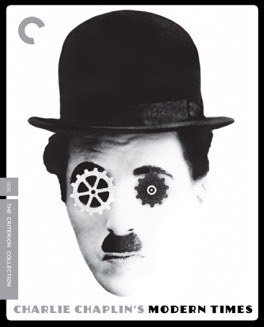 This film, the last outing of Chaplin’s Little Tramp character, is impeccably brilliant. I loved every second. Every joke was pitch perfect, and you can clearly see this was an artist at the peak of his powers. It’s also a cautionary tale for society, one that should be studied closely.

There’s something funny that happens when you watch films in a completely arbitrary order like I’m doing. As any loyal reader will likely know, I’m a huge fan of the work of Jacques Tati. One of the things I love so much about his films, is how they deal with the ideas of modernity, and specifically what a “modern” world means for the common people. Obviously, intellectually, I know his films were made decades after this one. But emotionally, this feels like a reference! It’s nonsense of course, simply the result of having seen the Tati films first, but it’s interesting.

The primary difference, is where Tati talks about the ills of modernity as a practical matter, this film is far more political. Chaplin made it during the height of the great depression, and as a result the issues at hand are much more life and death. It’s a testament to the power of comedy, that such extreme subjects as unemployment, poverty, homelessness, hunger, and death, can become something amusing and enjoyable to watch.

The march towards unrestrained capitalism of the 1920s had a devastating effect on most people everywhere. It’s scary then, that we seem to be led by people who view that decade as a time to strive for. The 1920s were just as bad as the 1930s for the poor, the 30s just spread the misery upwards, until only the very top were untouched. This film is a testament to why we should all be very concerned about the state of the world. It’s also a ridiculously fun piece of classic Chaplin. - Dec 29th, 2017