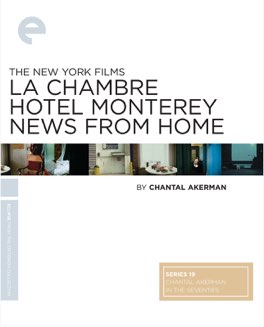 I really enjoyed this film. I cannot begin to suggest what it’s about, but I also really don’t think that matters much.

I have a mixed relationship with experimental cinema, as anyone who read my pieced on Hollis Frampton can attest to. Sometimes it resonates with me, and I love it. More often, I chafe at the level of effort involved to be a part of it. I’m ok with film as work. I certainly don’t want every film I watch to simply entertain me in my sleep. But for something to resonate with me, there has to be some toe-hold; there has to be some way for me to get involved.

This film gave me something to get involved with. It’s a bit silly to discuss story in an eleven minute silent film that features a camera simply panning around a woman’s apartment. But there’s a story here. I can’t say I know what it is. There’s just something in the movement of the camera, and the changing behavior of the woman in the bed. Something is going on, and for me that was enough. - Sep 26th, 2017