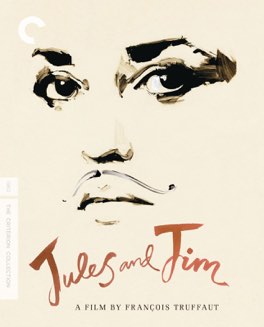 A beautiful film, that I really liked, but didn’t love. It’s too harsh on Jeanne Moreau for that. It reminded me of Design for Living, but with a much darker lesson.

What I’m about to say isn’t anything approaching a unique insight, but bear with me. The response an audience has to a film is a combination of the film and the audience themselves. Like I said, we’re not in knock-your-socks-off territory here. What that implies though, is that the moment you watch a film affects what you take away from it. Sometimes I watch a film at the wrong time, and it just doesn’t click. Sometimes I try again later, and find a completely different experience waiting for me. Sometimes though, I watch the right film at the right time, and really experience something. This was one of those times.

This is a film version of a somewhat true story. The author, whose book a young François Truffaut stumbled upon in the years before his directorial career began, dramatized events from his own life. The story is of two best friends, one French and one Austrian. They live in early 20th century Paris, and they share everything, including the women that pass through their lives. Eventually the Austrian man meets a woman who is different, one he doesn’t want to share. The film tells the story of that love, what happens when she is shared, and the fallout from their ideas on fidelity.

I don’t think I’ve mentioned this yet here, but I’m engaged to be married. It happened fairly recently, and our wedding is coming up. I was, therefore, in a particularly interesting place to see this film. To say that it affected me would be a strong understatement. My fiancé came home to a seemingly simple, if totally unexpected question. I asked her if she’d tell me if she was falling out of love with me. Naturally she was concerned, and then unhappy with the film for putting ideas in my head.

It’s an important question though, isn’t it? Of the many things I took from this film, the fickleness of bonds was a big one. Moreau’s character had fallen out of love with her husband, and he knew it, but he had no idea why. Not knowing why, there wasn’t all that much he could reasonably be expected to do about it. Being of a time where these things weren’t discussed, he was stuck. Luckily I don’t live in that time, nor am I that passive of a person. But wow, if that doesn’t showcase the power cinema can have over us. - Dec 12th, 2017