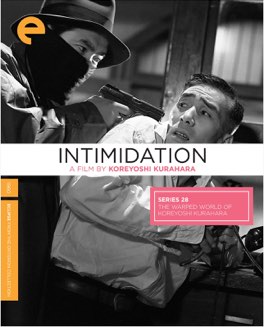 What an incredibly fun and cool film. I’m really hoping the rest of this set is as stylish and wonderful as this one is.

Film noir is such a wonderful genre. It hardly matters where the film itself came from.

I’ve seen excellent noirs from as disparate places as Argentina and Sweden, in fact I saw them back to back at SF’s excellent Noir City film festival.

There’s just something about the hopelessness of the form, the bleak unrelentingness, that combines with coolness to make something special. What can I say? I’m a fan of the genre, and so it was such a pleasure to discover this film.

The story, like most noirs I’ve seen, is deceptive. It involves the promotion of a bank manager from small town Japan. He’s being moved to the big city, and given a high ranking position.

The film starts at his going away party, where it seems like he’s got it made. Quickly we learn that’s not the case, as a blackmailer shows up looking for cash. That triggers a complicated mess of schemes, and double schemes, that make up the rest of the film’s story.

The entire film is great, but there’s one sequence I particularly enjoyed. It’s something I’ve seen done in other films, both earlier and later, and it’s a technique I love.

We know a character is planning to rob a bank. We see that character begin to rob the bank, and everything is high stakes and heisty. Suddenly, the story turns strange, and we discover this isn’t the actual heist, but merely a dream about how the heist might go.