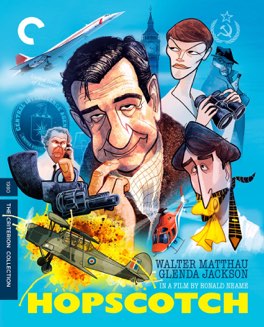 Oh I loved this film. It’s as quirky and cool as can be. I had a smile on my face from beginning to end. I’m really becoming quite a devotee of Ronald Neame comedies.

There’s something fascinating around the expectations we have of actors. Because of my age, I was born the year after this film, I have a certain memory of Walter Matthau. He’s the guy from Grumpy Old Men. He’s everyone’s grandfather. He’s definitely not a James Bond superspy. It was surprisingly distracting to me initially, to get over the incongruity of seeing him in this role, and to begin to see the incredible film hiding in plain sight.

This is the story of Miles Kendig, an aging CIA operative with an old school mentality. Times have changed, he has a new boss, and they definitely don’t see eye to eye. Kendig is a field man, he gets things done, but not always by the book. His new boss finds an excuse to “promote” him to a desk job, and Kendig sees an opening to get out. He doesn’t just want out for himself though, he wants to throw the whole system for a loop. He begins sending out chapters of a tell-all book he’s writing, and finds himself immediately chased by both the CIA and the KGB.

Matthau played the villain in another favorite caper film of mine, Stanley Donen’s Charade. Perhaps because that film is so much older than this one, and Matthau is therefore so much younger, it didn’t trigger the same initial reaction this did. Or maybe it’s because Matthau is playing a stodgy villain. In this film he’s the Cary Grant character, the cool guy center of attention. It’s just a totally out of character role, and once I got over my expectations I loved every second of it. - Jan 3rd, 2017