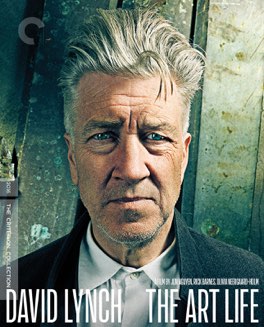 This was a chore to get through, but really I’m just not the intended audience. I can see how this would be interesting to someone, it just wasn’t that interesting to me.

There are some things I should mention right at the beginning. I am, generally speaking, a fan of the films of David Lynch. I’m not a Lynch superfan, but some of his work absolutely speaks to me. I’m also a lover of his television show, Twin Peaks, which I was absolutely obsessed with as a college student. All of that is to say, I like a lot of this man’s work.

On the other hand, I have never been much of a fan of his art. I tend to find it fairly uninteresting, to the point of being almost boring. I can certainly see that he has a perspective, and I understand why others might enjoy it, but it’s simply not for me. This has been consistently true, no matter how much my love for his films has grown or shrunk.

This film then, is also not really for me. This is a look at Lynch’s art career, with only the tiniest dip into the beginnings of his making films. We get a lot of shots of his art, with narration telling stories about his childhood. If you like his art, you’ll like this film, it’s pretty much that simple. If you’re interested in hearing about how Lynch grew up, or how he became an artist, you’ll probably love this film. If you’re like me, and less interested in any of this, it’s a bit more of a challenge.

I didn’t hate the film. I wouldn’t even say I disliked it. I found it... alright. There were some amusing anecdotes, and it’s interesting to see how banal Lynch really is. For an artist whose output uses mystery as its engine, the man himself is shockingly normal. It’s refreshing to see how little interest he has in putting on any kind of airs for the camera, or of trying to be anything he’s not.

Unfortunately, at least for me, that interest wasn’t enough to sustain this film. I found myself struggling to get through it, and it’s not particularly long. A lot of that was that almost everything we see is Lynch working on art that I’m not all that excited to see. If you are, then I think the behind-the-scenes aspect of all of this is probably going to be exactly what you’re looking for.

So, I cannot recommend this blindly, or without caveats. I can recommend it wholeheartedly to its intended audience, and that’s not a small thing. If you’re a lover of Lynch, if you find him fascinating, or you like his art, this is for you. You’re in for a treat, with tons of the kind of minor details fans can get excited about. If, like me, you’re more a liker of Lynch, or you also don’t find much to appreciate in his art, then maybe this isn’t for you. That’s ok, I’m still glad I watched it. - Dec 17th, 2017