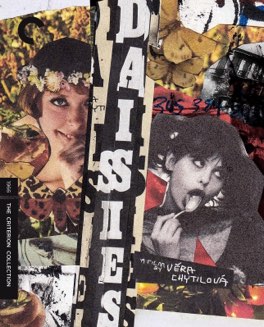 A beautiful film, and also supremely funny. It’s irreverent and anarchic, but still has so much to say. I want to watch it many, many more times.

Some films reveal themselves immediately. Others take time to discover, with repeated viewings a necessity if you want to understand. This film might initially seem a bit shallow, but you can see the depth hiding in the corners. As the story plays out, an audience could decide it’s something of a trifle. If so, that’s a shame, because there’s a lot more to this film than its letting on. I’ve been pondering its meaning since I saw it, but I’ll need to see it many more times before I’m confident in my understanding.

This is the story of two young ladies named Marie. They’ve decided since the world is clearly spoiled rotten, they might as well be too. This mostly takes the form of them wandering around, and doing whatever makes them immediately happy. It’s a mixture of destruction, disobedience, and tricking lecherous old married men to pay for nice dinners. They fight, sometimes with each other, they run around. Mostly they explore their world, and their place in it.

From the surface it could all seem shallow, and a bit silly. Certainly, you could still enjoy it if that’s how you felt. It has an immense amount of pure anarchic charm. Still, if you view it with an understanding of its historical context, there’s so much more. The film was banned almost immediately upon release, ostensibly for being too decadent for the communist censors. Even if that was all that was going on, if it was just a paean to consumerism, it would be a revolutionary statement against its reality.

This is a film about female empowerment. Its about young women standing up for themselves in a world that relentlessly wants to control them. These are young women, who are acting outside the social conventions of society. If they were young men, it would be just another comedy. We allow young men to go through this sort of personal discovery. Because these are young women, who are fully aware of their own power, and unapologetic about it, it becomes monumental. This is a film with as much to say today as when it was first released. It’s a sad truth, but I’m still happy we have this film. - Jan 27th, 2017