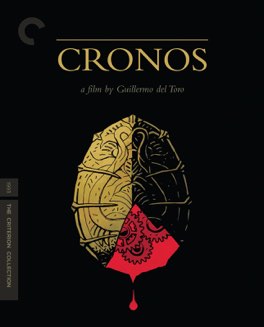 What a stunningly inventive visual creation this film is. It’s like someone took the mind of Jim Henson, and turned it all the way to darkness.

I used to think about death a lot. Not in a morbid way, nor in a fearful way necessarily. More like in an analytical way. Like, I simply could not imagine that the world would keep going without me. It seemed, well, wrong. I have so much I want to do, so much I want to see, to experience. How could that ever stop being true? How could I ever want it to stop?

This film is, in some sense, about the same questions. The story opens with a brief narration about a supposed alchemist in the 16th century who created a device to grant eternal life. He uses it to survive until the 1930s, when he’s accidentally killed in the only way he can be. Fast forward to the present, and an unwitting man is about to discover the device, as well as embroil himself in a conflict with someone who actually knows what it is, and wants it badly.

When I was younger, I was a huge fan of comic books. I still am actually, but at that point I was reading them constantly. One of my favorites was a series called Starman, which came out about a year after this film. In an early issue of that series, there is a plot device that’s extremely similar in basic nature to the story of this film. Having seen this now, I wonder if the author, James Robinson, was knowingly or unknowingly inspired by this film.

The idea that immortality has its price is, of course, not a new one. It’s likely been around almost as long as the idea of immortality. I’m quite familiar with immortality as a sadness, the fact that you will outlive everyone and everything you love. I’m not sure I’d really seen this level of intimate vampirism though, and it adds a fascinating dimension to the idea. What price is too high, and is that the same for everyone? It’s given me something new to ponder over. - Jun 9th, 2017