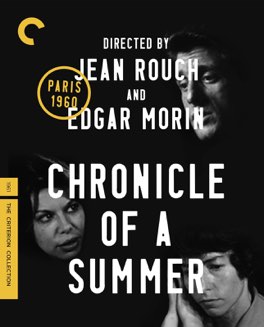 Chronicle of a Summer

This isn’t a complete success, but there’s more than enough to sustain interest. As always, it’s fascinating to get a window into people from a different time and place.

There’s an impossibly French quality that I love, that has something to do with their ability to be at once startlingly direct, and intensely philosophical.

It’s an ability that’s extremely well represented in this film, which almost feels like a direct attempt to capture it. There’s an everyday feeling to the discussions that make up the bulk of the film, which is combined with a method of talking, and way of seeing the world, that seems uniquely French to me.

This film, the first in the genre of Cinéma Vérité, is a collection of conversations the filmmakers had with "random" French people in 1960. They start out by asking the question “Are you happy?” From there, they touch on all manner of related subjects.

Additionally, they give a glimpse into their own process of making the movie. There are several difficult discussions between the filmmakers, about the nature of their process, and how they feel about the results.

One of the people they interview heavily in this film is a woman named Marceline Loridan. She’s a holocaust survivor, who was sent to a concentration camp, and lost most of her family. What I find absolutely stupefying about the film is how clueless everyone around her is to her situation.

This film was made fifteen years after the end of the war, and yet people seem to be completely unaware of what the numbers tattooed on her arm mean. At one point a subject says he knows what the holocaust was, but only because he has watched Alain Resnais’ documentary Night and Fog.

It’s unnerving how little the people in her life know about what she went through. It’s therefore extremely important, how much of her experience the filmmakers chose to include in the film.

Films like this, in addition to documentaries like Night and Fog, were crucial in spreading that knowledge to a greater audience. It’s somehow also fitting, that she herself is equally ignorant, to the point of prejudice, about the situation in African countries that were French colonies.