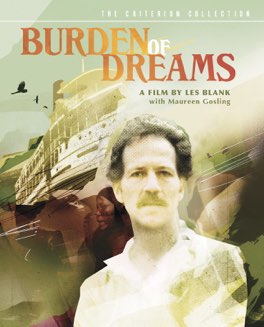 In some sense, the role of an artist is to make manifest their dreams in the physical world. Werner Herzog is, without a doubt, an artist. However, according to an interview included with the film, he doesn’t dream. At least not at night. He daydreams instead, and Fitzcarraldo was born out of one of his daydreams. Herzog’s attempt to actualize this daydream, to turn it into a finished film, is the subject at hand.

This is a making-of documentary, which is hardly a genre known for having high artistic merit. But, it’s also a making-of documentary made by Les Blank, himself an artist, and a filmmaker who was completely incapable of producing a straightforward commission. That’s certainly the case here, but I was surprised at how much he managed to stay on track. Certainly compared to A Poem is a Naked Person, his film on Leon Russell. This is playing it far more safe, at least relative to intention.

Perhaps it’s because, as Blank himself said, this was a more interesting story. Don’t get me wrong, he still wanders off into his own interests. Frequently. He just also completely captures the thing he’s there to document. He’s making a making-of, and he mostly stays with that narrative. I learned all about the insanity of Herzog’s dream. Of his desires for the finished film, and of all the problems along the way to achieving that. I also got just enough of the Blankisms, to make it feel like an entry in his own oeuvre.

I love Werner Herzog. It has very little to do with his work. I’ve seen almost none of his films. I’ve never even seen Fitzcarraldo. I just love him. He’s a maniac. An adventurer. Someone who cannot help but do the hardest damn thing he could imagine. He pulls a ship over a mountain. Why? Not because he thinks CGI makes things unreal, but rather because he wants to show people that you can manifest your dreams. Werner Fucking Herzog. - Mar 20th, 2017