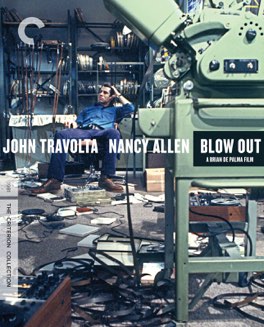 Above everything else, this is just a lot of fun. It has more to offer than that, but really that’s enough. I enjoyed myself from beginning to end.

I think my favorite thing about this film is that its central mystery is never really solved. It’s resolved certainly, but only in the most superficial way possible. It’s a paranoia style thriller that comes to a conclusion, but recognizes you don’t have to have answers to make an entertaining statement about questions.

This is the story of Jack Terry, a sound technician for a production company specializing in sleezy exploitation films. While searching for new wind sounds, he inadvertently records the assassination of a presidential candidate. He also rescues a young woman who was in the car with the politician as it went into a lake. After the world decides the death was an accident he embarks on a mission to prove it was actually murder. Danger and paranoia ensues.

The film is a direct homage to Michelangelo Antonioni’s Blow Up, where the protagonist is a photographer. That film came out in 1966 though, and as such it’s a much less cynical affair. This film is a product of the American seventies. A decade marked by a growing resentment and unease with people in power. A decade of film that explored feelings of paranoia and threat. This film has a discomfort to it that is totally different from the swinging London sixties of Blow Up.

Some films are made or broken by their endings. If this film had ended on a positive note it would not have had nearly the same impact. Much like The Vanishing, this is a film that needs its victory to be a defeat. If the central conspiracy had been unmasked and revealed, it would have weakened the message of the film, the powerlessness of the common person against the forces of society.

The secondary idea of the film, that of the forgery of evidence, is also a fascinating one. Jack Terry’s admission that his evidence was completely fakeable, but he knew it was real and therefore believed it, is so interesting. Where does paranoia become delusion? We the audience know Terry is right, but what if he wasn’t? Does his being right make his faking of destroyed evidence acceptable? At what point does reality become unimportant compared to belief? It’s a question that’s at least as relevant now as when this film was originally released. - Oct 21st, 2017