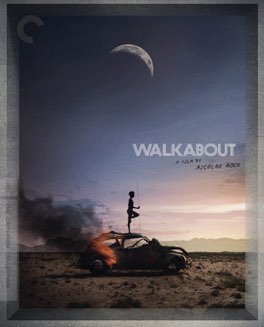 One of the most beautiful films I’ve seen in quite some time. It has a hypnotic feel to it, and I found it extremely easy to surrender to its movements.

There is quite a lot of writing about this film that sort of thrusts a conventional narrative on to it. These takes are generally predicated on other “so-called non-primitive person survives ordeal thanks to endearing help from so-called primitive person’s help, and we all learn something” films. On top of that they add the rather blunt symbolism found in the film, and they cook up a portrait of a simplistic, if beautiful, final product. There’s nothing wrong with any of that, and arguments in favor can definitely be made, but it’s not what I found in the film.

The story follows a teenage girl, and her much younger brother. We never learn their names. Their father takes them on an outing into the Australian Outback, but we learn quickly this is a cover for his own murder-suicide. The kids survive, but are now stranded. They have limited supplies, and are far away from anything they would recognize. The sister does her best to keep them moving, but their chances are dire. Then they randomly encounter an Aboriginal boy, around the same age as the girl, on his Walkabout. They join up with him, and he helps them to survive in the Outback for a while.

Like I said, you don’t have to stretch too far to find a simple narrative, if that’s what you’re looking for. If it is just that simple, than it’s poorly done, because it never comes together. Nothing in the film points to a romance between the girl and the boy for example. They never even learn to communicate, using the younger brother as a go-between for the entire film. If anything, each of them is an island, with only the Aboriginal boy even attempting to bridge anything. Other then that, they’re travel companions, and things happen to them. That’s about the extent of it.

I found it interested that only the younger brother has any luck communicating with the Aboriginal boy. The girl doesn’t even really ever try. She’s frustrated, and finds it inconceivable someone wouldn’t understand English. The younger boy doesn’t care about that, he simply finds a way to cross through, and communicate. He hasn’t lost his ability to play, and to learn through play. The girl is part of society. She only occasionally allows herself to be free, and only when alone. The boys don’t care at all. In a film full of rough symbolism, it’s a rare subtle statement. - Dec 21st, 2016