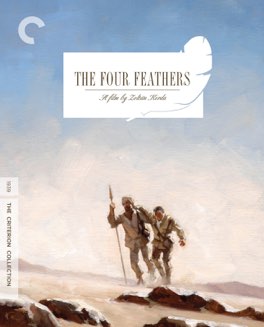 An exercise in the pure majesty of Technicolor; this is a breathtakingly beautiful film. Full of fun and adventure, and a plot that’s a lot less predictable than I was expecting.

It’s something like fortuitous timing that I watched this film when I did. Lately I’ve been obsessed with a podcast called The History of Rome, which I highly recommend, and this film fits into that narrative in an unexpected way for me. Specifically, this is a film about the cost of empire, the human cost that it takes to keep something like the Roman, or British, empires growing. It’s about the ideals those needs instill in their subjects, and the damage they can cause. It’s a message I don’t think director Zoltán Korda intended, but one I found fascinating.

The film follows the story of Harry Faversham, the son of a career soldier, who is serving as a lieutenant in the King’s army. On the eve of his unit’s deployment to fight in the Mahdist War in the Sudan, he abruptly resigns his commission. He tells his three army friends he’s leaving because he thinks the war is folly, and the country needs him at home more than they need him abroad. His friends each give him the ultimate symbol of their contempt for his choice, a white feather representing his cowardice. When his fiancée, the daughter of one of his father’s old comrades, agrees with them, he breaks off the engagement and heads to Africa, to try and win back his honor by helping his former friends.

The film is, at heart, an adventure tale of one man’s attempt to redeem himself from his own shame. Harry made his choice out of fear of being revealed as a coward, scared by stories his father told him as a kid of men killing themselves after failing in battle. His fear is so overpowering that he convinces himself he’s actually attempting to stand up for principle, but when even his fiancée turns against him he cannot lie to himself any more. Heading into danger is therefore his attempt to prove to himself he’s not the man he was afraid he was, and to fix his betrayal of his friends.

All of it makes for a fun film, minus some cringing at the portrayal of the other side of this fight, although this is one of the least offensive films from this era I’ve seen. It’s not, however, what I found most interesting to think about. What Harry is being forced into is a belief that he has to fight, for the glory of the empire. It’s the same culture that existed in Rome, and I would assume exists in all military empires throughout history. By definition, an empire demands that you conquer territory and hold it, against the will of the people living in the areas you’ve conquered. The only way to do this is through force, and thus the children of your empire become the living instrument of that force. Their lives are required by the needs of your empire.

Harry’s friends want nothing more than to live up to the societal expectations of them. Even his fiancée says, that while she agrees with him in principle that the war is pointless, she has to obey, as it’s the price she pays for being a child of the empire. It’s a deep idea, and one I’ve been thinking a lot about while listening to the history of Rome. Roman youth were eager for a reason to fight, and saw injury, or loss of life, as respectable ends for a life lived well. It’s a brutal world view, and one the young men of this film also share. Even the supposedly enlightened Harry cannot run from the idea that he’s a coward. From my perspective, sitting here in early 21st century America, that’s madness. I’m incredibly lucky, to have grown up in a time and place that didn’t demand those sacrifices from me. - Mar 10th, 2016