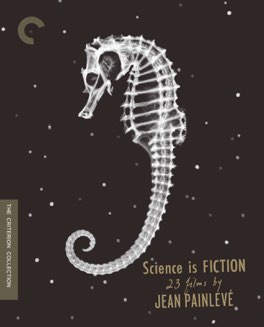 This set is what makes the Criterion Collection special. A collection of films that I would otherwise never have found, lovingly presented to me.

This is my first introduction to the work of Jean Painlevé, a biologist who made over 200 science films. Science is Fiction was his motto, and with it he created “scientific-poetic cinema,” a style that advocated presenting science as both informational and entertaining. He was particularly well known for his popular underwater fauna study, and that’s what the majority of these films focus on. Luckily for us, we also get a few of his math and physics films, as well as a couple of his pure science films. This is one of those sets that perfectly encapsulate the idea of Criterion as a “film school in a box."

I think I could listen to almost anyone, who is really passionate about anything, talk about it at length. It doesn’t really matter to me what they’re focused on, I enjoy the intensity of their love. Plus, it’s a great opportunity to learn about random things. These films, with their focus on underrepresented creatures, is, therefore, squarely in my wheelhouse. I loved learning about all the weird things that live in the ocean, most of them so small they cannot even be seen without magnification. These films make things I’d never even imagined seem to incredibly beautiful.

As much as I loved the films about flora and fauna though, I loved the math films even more. My favorite film from this set explains the concept of fourth dimensional space. In my job as a software developer, I’m constantly trying to figure out ways to teach things to people who have no background in the subject we’re discussing. I’m so impressed when people are really good at it, as it’s something I’m always struggling with. The explanation of the dimensionality of existence was so well done, so clear and concise, without being condescending.

It’s such an amazing skill. Painlevé is able throughout these films to explain things, most of which I know nothing about, without assuming I’m stupid. He teaches the parts that need teaching, ignores the details I don’t have to understand to move forward, and focuses above all on the beauty of everything. It makes for something I can just enjoy. No matter which animal or subject he’s talking about. These films are powerful and beautiful, and I’ll be returning to them often. - Dec 25th, 2016