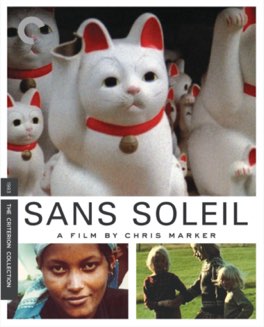 A beautiful, and cryptic, examination of human perception. I’ll need to watch it many more times to unpack everything. I think I’ll enjoy each attempt.

This film is one of the reasons I decided to be less strict with myself about what I write here. I first watched it slightly more than a year ago, enjoyed it, but couldn’t think of something weighty enough to write about. I just didn’t have enough to say about it, to justify the length of post I was accustomed to. I felt shackled by the format I had devised. Luckily, I eventually realized that I had the key to those shackles. Today I watched the film again, and I still don’t know how much I have to say, but I’m gonna put down what I do have.

This is an essay about the unreliability of memory, disguised as a travelogue. Chris Marker went around the world, primarily to Japan and Africa, and filmed a bunch of footage with a silent 16mm camera. Over that footage he has a woman reading letters sent by a mysterious man known as Sandor Krasna, but actually written by Marker himself. There is no conventional story to this film. Instead we get ruminations on many subjects, but mostly on our inability to properly remember anything. Marker is fascinated by what this lack of nuance does to our perception of the wider world, and our understanding of our history.

It’s a comment early in the film that most stuck with me. The letter writer claims that he has been around the world a few times, and is now only interested in things that are completely obvious and boring. Now, I haven’t exactly traveled around the world, but I’ve been to quite a few places. Perhaps I’m just not jaded enough, but I cannot imagine finding anything in strange places that’s completely obvious and boring. The world is just so varied, that inevitably there’s something of interest everywhere I go. It’s sad to think that it’s possible to just be over it all. I hope I never get like that, no matter how many times I go around the world. - Nov 19th, 2016