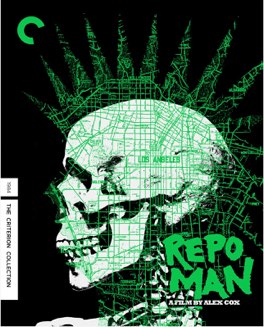 An exceptionally fun and goofy film, plus some interesting commentary on the politics of its time. Now I know why this film is so beloved.

Like so many young future cinephiles, the video store in my hometown was one of the most important parts of my childhood. I spent so much time browsing and chatting with the employees about film, I eventually ended up briefly working there. Of all the sections in that store, one stood out as my overwhelming favorite, the place where I found all the best things to watch. That section was cult classics, and I watched damn near the entire thing front to back over the years. I missed this film though, which is incredible, as this might be the purest example of a cult classic I’ve ever seen.

The story is predictably oddball, and yet so fresh and interesting. It follows Otto, a young punk in early 80s Los Angeles, who ends up working at a small repossession agency after his burnout hippie parents donate the money they had promised him for his high school graduation to a televangelist. Otto, and his mentor Bud, attempt to recover a Chevy Malibu that is apparently worth an outrageous $20,000 to whomever finds it. Of course, it turns out that the Malibu is also being sought by various government agencies, conspiracy groups, and other entrepreneurs interested in the money. The whole thing ends up in total chaos, with one of the stranger endings I’ve ever seen.

What makes something a cult classic? To my mind, the most basic description would be a film that received limited attention upon its release, but over time developed an incredibly devoted following. If we go with these simple criteria, this film easily qualifies. Initially released to confusion, and quickly pulled from theaters, it had a limited renaissance when its soundtrack was released to some acclaim. Over time the film became something of a whispered treasure; the kind of film that a video store employee might push on the right kid, to their surprise and delight.

There’s significantly more to it though. Certainly the definition gets expanded all the time, but for something to be a cult classic, it must, by bare necessity, also be a classic. This represents a slight differentiation in terms. I absolutely believe something can be cult, without necessarily being classic. The films that most remind me of this one are probably Gregg Araki’s The Doom Generation and Nowhere, both of which are cult without any doubt, but don’t rise to nearly the same level of classic that this film does. One possible reason for that has to do with authenticity. To be a real cult classic, perhaps the film has to be made with an integrity of purpose that still shines through whatever hurdles prevented it from being widely accepted at the time of its release.

This film is shockingly authentic. It doesn’t do weird for weirdness sake, it does weird as the representation of the ideals of its creators. Director Alex Cox was a part of the scene that he was, in some sense, documenting. This film showcases a punk aesthetic, and punk music, at a time when that movement was almost completely absent from mainstream America. It’s authentically weird in that sense, bursting with the creativity and ideas of the people who made it. That’s not to say that the film doesn’t know it’s absurd, it does, it’s simply not doing it to try and please a demographic. It’s like a time capsule has been opened and we get to peer at something real from the past. Which, as any long time reader of this site will know, makes me overjoyed indeed. - Feb 28th, 2016