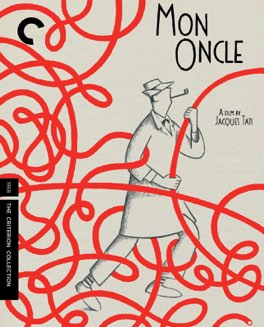 As delightful and entertaining a film as I’ve seen in quite some time. The garden party is a highlight, with so many small moments of creativity that bubble up, until the entire thing explodes into pure joy.

One of my favorite things about Jacques Tati is his unconventional relationship with sound. He uses it in a way that’s different from every other director I know of. It’s almost a silent film understanding of how and when to use dialogue. A lot this film isn’t subtitled at all. Which is because it’s entirely irrelevant. Tati understands that people talking about everyday things don’t need to be heard to be understood. Like the best silents, he knows you don’t need to intertitle everything. Making your point is what’s important, not specific words.

That’s perhaps even more true of a film like this, which isn’t beholden to its story for very much. The framework narrative is just that, a framework. It provides opportunities to create Tati’s usual jokes at the expense of modernity. There are lots of gags about confusing new technology, and overly opaque interaction methods. It’s a film about the contrast between classical France, with all of its chaos, and the attempted order of a modern world Tati felt restricted by.

This entire film is the joke. There are specific gags, but there is also a mood of joy pervading everything. The funniest parts are made immeasurably more enjoyable by what’s around them. Like a great jazz band, it’s all the things that aren’t the focus that provide the effect. By the time a gag happens, we’re so ready to laugh that it’s almost unconscious. This film is a masterclass in subtle comedy. Almost nothing is over the top, but it all works together in perfect harmony. - Nov 23rd, 2016