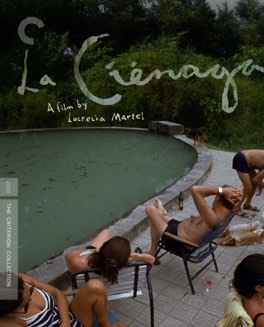 A remarkable film from a part of the world I know very little about. It’s such a treat to get to experience something so totally new and different.

I watched this film with a friend from Argentina, and I’m really glad I did. One of my favorite things about doing this project is that I’m exposed to perspectives from all over the world. It’s great. It can be a challenge though, especially if the film is a subtle one. There’s a high chance I’ll miss a lot of the subtlety, as someone who is outside the culture the film was intended for. My friend helped me to see this film at a much deeper level.

This is the story of two semi-related families living in a fictional province north of Buenos Aires. One of the families is spending the summer at their vacation cottage. The parents spend most of their time drinking, and the kids are almost totally unsupervised. The film starts, and ends, in the middle of the story. We’re never really quite sure how anyone is related, or what’s actually going on. As the film opens, the mother of one the families has a drunken accident, and it compels her son, as well as her cousins, to check in on her.

If that doesn’t sound like much of a story, it’s because it really isn’t. There’s a ton going on, but no strong central narrative. What we have instead is an overwhelming sense of dread, and an almost total lack of achievement or progression. The film builds the dread throughout. It’s in the little things, like the way the camera is a bit too close to everything at all times, so you feel like you can’t escape from the story. It’s the way gunshots are a common background sound, or how a storm always seems to be on the horizon. It constantly feels like something bad is about to happen.

The dread ties in with the torpor these people are stuck in. It’s like watching life in molasses. None of these characters are going anywhere. They are all either stuck where they are, or losing ground in their lives. It creates a visceral reaction rather than an intellectual one. I was overwhelmed, repulsed, and enthralled. I related to the feeling, but not to the characters. They reminded me of periods in my own life where I was trapped in stasis. I wouldn’t describe this as a fun film to watch, but I won’t soon forget it. It made me feel something, which has to be one of the highest aspirations of any art. - Nov 30th, 2016